What is an oxygen refill system? 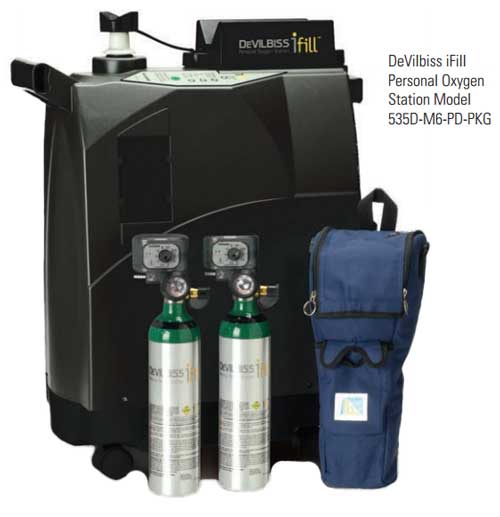 Why use an oxygen refill system?

The ability to fill oxygen cylinders at home provides greater independence and freedom for oxygen patients. Home oxygen eliminates time-consuming and costly service calls often associated with oxygen tank pickup and deliveries. By filling your own oxygen tanks, you control your own schedule and are not dependent upon a third party. Come and go as you please, knowing that another filled oxygen cylinder is always ready for use.

When can you use an oxygen refill system?

Empty oxygen cylinders may be refilled while you sleep, while you are away shopping or anytime that you have an empty cylinder that requires refilling. You can refill empty oxygen tanks day or night. Just place the cylinder in the refill machine and turn it on. When the cylinder is refilled you can start using it or place it in reserve for when you are ready. With your own oxygen refilling station, you no longer have numerous empty oxygen tanks lying around waiting for the local oxygen vendor to come by to pick them up. An oxygen refill system gives you more freedom and choices and allows you to work your own schedule independent of third parties

Where can you use an oxygen transfill system?

Oxygen refill stations can be used at home, the office, an RV or even a boat. Where ever you have access to a 110-120 volt AC electrical system, you may refill oxygen tanks. Just plug it in and turn it on!

A few years ago, DeVilbiss developed the iFill Personal Oxygen Refill Station. The iFill offers the added advantage of having a built-in oxygen concentrator rather than depending upon a separate oxygen concentrator to supply the tank compressor with oxygen. Additionally, the iFill is equipped with a large cylinder release ring designed for individuals with limited dexterity. Combined with a low price, the iFill offers a great solution for home oxygen therapy patients who want to refill their oxygen cylinders at home.

The Purefill can operate with any oxygen concentrator that has a transfill port and produces an oxygen concentration greater than 90%, making it compatible with the Pure Oxygen Concentrator, Respironics EverFlo, the Invacare Perfecto 2 or the Platinum 10. This transfill device operates at 55 decibles of noise and comes with a 3 year warranty. Weighing 35 pounds, the PureFill can fill an empty M6 oxygen clinder in 80 minutes.

How do the four home oxygen refill stations compare?

All four transfill systems are somewhat similar. They all come with a 3 year warranty and three can operate to at least 6,000 feet above sea level or higher. (No data from Drive Medical is available for the maximum operating altitude for the PureFill.) All can provide oxygen concentration of 90% or higher. All three can refill an M6 size oxygen cylinder in 80 minutes or less. Three of the four refill machines require proprietary cylinders to refill. The PureFill, according to Drive Medical, may be used to refill any M4, M6, M9 and D cylinders. Although similar in many ways, there are differences.

Both the iFill and the UltraFill provide oxygen concentration levels between 90 to 96%. Invacare only provides the specification that the HomeFill offers an oxygen concentration level of 90% and above. The UltraFill provides the highest operating altitude at 7,500 feet above sea level while the iFill comes in second at 6,562 feet. 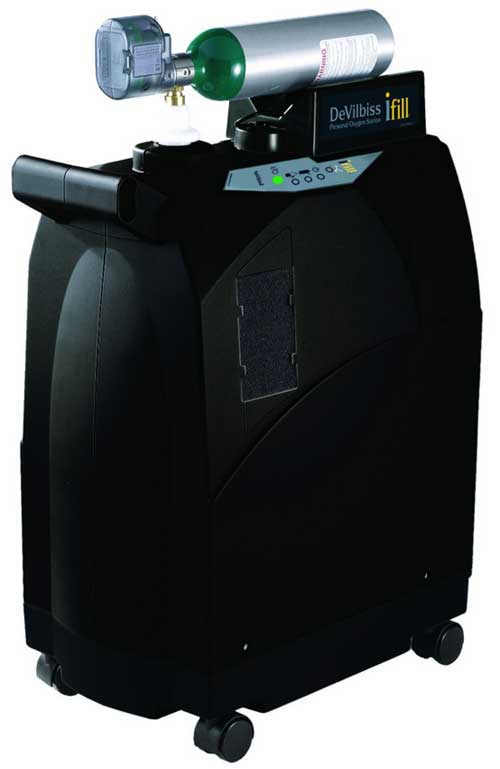 In this comparative category, the Respironics Ultrafill makes a clean sweep. It emits the lowest noise level of 44 decibels, consumes the least amount of power at 110 watts while producing the highest maximum pressure of 3,000 PSI. The Ultrafill refills the M6 oxygen cylinder in 65 minutes--10 minutes less than the iFill or the HomeFill.

The UltraFill has the capability of refilling both 2,000 PSI oxygen cylinders as well as 3,000 PSI cylinders. The iFill and HomeFill can only refill 2,000 PSI cylinders. The iFill has its own internal oxygen concentrator while the HomeFill and the UltraFill require a separate purchase of a home oxygen concentrator of 5 liters or more to supplement their oxygen refill device. The iFill comes with a user-friendly, large cylinder release ring designed for individuals with limited dexterity. The release ring requires very little pressure to depress, making it easy to install and remove oxygen cylinders. 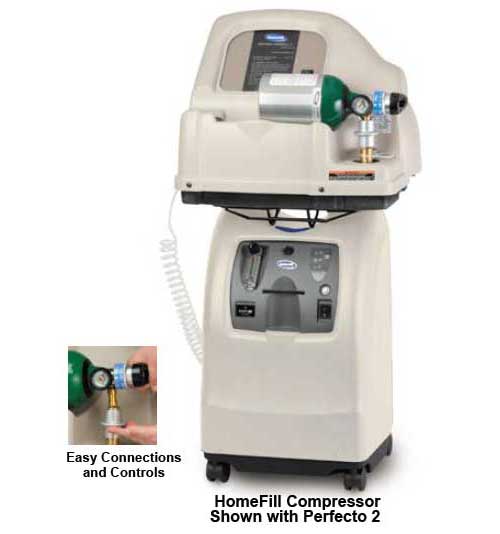 The Respironics UltraFill runs away from the competition with many number 1 rankings. The features of the UltraFill and its performance are remarkable. But, it is also the highest priced transfill system and requires a separate oxygen concentrator in order to function, making it even more expensive. While offering the best performance and best operating factors, the UltraFill is challenged by the stand alone capability of the DeVilbiss iFill. The iFill is also priced significantly lower than the UltraFill. When adding the price of an oxygen concentrator to the already high price of the UltraFill, it is likely that most consumers will choose the iFill over the UltraFill on the basis of value.

Below is a chart that shows the specifications for each transfill station and provides a side-by-side comparison. Highlighted cells depict category leaders. 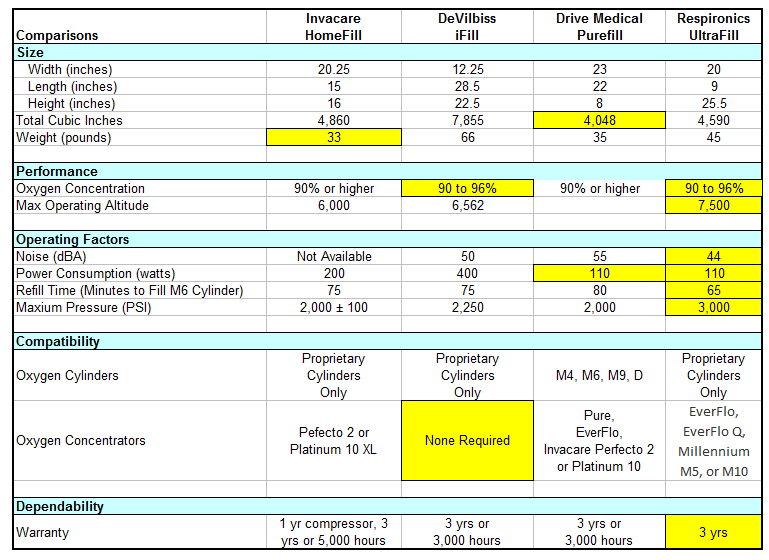