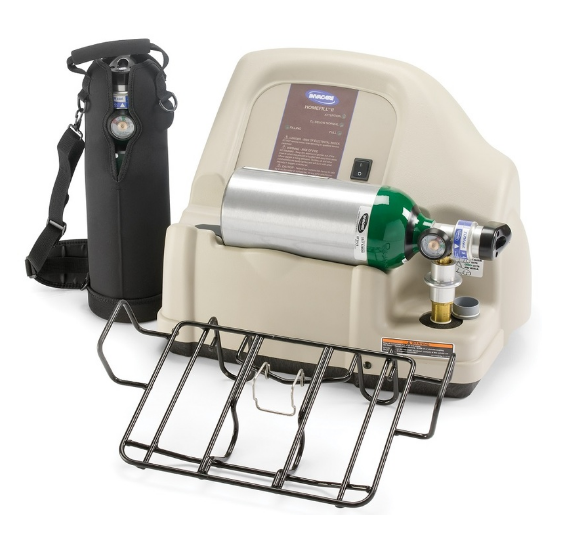 Customers Also Bought
Get Them While In Stock!
Description
Reviews
Q/A

HomeFill II Oxygen System by Invacare is a Home Oxygen Refill System that allows for the refill of oxygen tanks or cylinders from the comfort of your home. The HomeFill machine refills high-pressure oxygen cylinders from a concentrator. The device is a multi-stage pump that simply and safely compresses O2 delivered from an Invacare 5-liter or a 10-liter oxygen concentrator into oxygen cylinders in sizes M2, ML4, ML6, M6, M9, and D. The ability to fill cylinders at home provides greater independence and freedom for individuals who use oxygen concentrators, like the Perfecto 2 Concentrator. Home care providers will also benefit from the virtual elimination of time-consuming and costly service calls often associated with cylinder or liquid oxygen deliveries.

The Invacare HomeFill II System is compatible with both the aforementioned 5 Liter Perfecto 2, as well as the Platinum 10 XL Concentrator, a 10 Liter machine. Oxygen Concentrators are sold separately.

Please note: oxygen concentrators are for supplemental use NOT as a primary source of oxygen. The user may experience periods of inactivity due to interruption in electrical power or the need to have the device repaired.

The customer is responsible to arrange a backup source of supplementary oxygen in case of device failure. Vitality Medical assumes no liability for failure to provide a backup or the failure to adhere to manufacturer recommendations.

One of the things about the home fill system is that when you turn on the concentrator you need to have the liter filled at least at two and no higher than three on a five liter concentrator. It takes at least two liters to fill the tanks off on a home fill.

If a patient is ordered on four liters they can't have a home fill system unless we convert them over to a 10 liter concentrator. Make sure your flow meter is set to two no higher than three, you're going to have a piece of tubing that's going to go between the two of them, they fit in here and you just bring it over the green thing on the bottom.

Then when you turn on the machine you're going to hear a couple of alarms. The home fill system is going to say, some of them have a wait light that tells you to wait. This one is just saying low O2, there are a couple of different systems out there.

When they're calling in to troubleshoot and they tell you those lights are on, if it's a wait or if it's a low O2 it could be because the concentrator is not putting out enough oxygen. Therefore the home fill system will not fill the tank, or they've done something wrong. They either have the liter flow, if the liter flow is wrong it's not going to tell you that it just takes a longer time to fill the tank if it's a little under it's going to take a little longer to fill a tank.

A tank this size takes about two hours and forty-five minutes to fill, where the little short one takes maybe two hours and ten minutes to fill, and I've got one of the bigger ones. When it's ready it's going to tell you that it's filling and you're going to hear a churning sound so you can actually hear a difference when it actually goes into the fill cycle on the machine.

Speaker 1:
That's right, it does take a while for the concentration to build up but if they're still having issues even after, and these should build up air quickly. I think within a few minutes it should start filling here, you can hear a churn and it will start doing it.

Speaker 3:
Regarding getting the tank to line up, I have a couple of calls that it just won't go in. You did something like you were pressing.

Speaker 3:
Did you just push down on the silver thing?

Speaker 1:
Yeah just help it in. Usually it will spring up when the tank's released so that when you pop the tank down it opens it up and opens up the little silver, the little gold head so it will hook on to the pin. But otherwise it's because it didn't position itself from the last fill so sometimes you just have to pull at these little things here to get them to lock down.

Any questions? This is the rack system and then there's a tank system that the home fill will sit on top of. Then we also have the perfecto did you hear it, it just switched so now it's going to tell you again.

Speaker 3:
So that one's not working.

Speaker 1:
It's in the fill, it's saying filling. So after the two hours and 45 minutes if the tank is completely empty it's going to take that long. The machine will actually shut itself off, they can still leave it on they just come over and physically turn it off. A patient can actually leave their home while one of these are filling and it's not going to overfill, it can't overfill.

The machine will automatically cycle off when it hits 2,000. One of the things that the patients are taught when they're filling the tanks, they don't have to have the tank completely empty to refill it. But they do have to have it below the 1,000 mark in order to fill it. If they're at 1,100 all they have to do is bleed off 100 pounds of pressure or maybe 200 pounds of pressure, just open it up at 2 liters continuous and then they can bleed out that and then they can fill it.

They don't have to completely empty their tank because it's going to take another two hours and 45 minutes to fill it. But it does have to be under the 1,000 mark in order to fill, am I right on that? I think there's some newer ones that are coming out that they don't to I heard. I don't think we have any of those.

Most of the patients will fill them before they're even empty.

So let's say that it's finished, I'm going to turn it off okay. Then I'm' going to release the tank by pressing down on the silver and it will pop it up and then it's all finished. Then you just put your cap back on here which I don't see it, hanging on there. Then you should always recap so we don't get any dirt or debris inside of it.

Speaker 2:
A lot of times the problem with that is as simple as don't turn the compressor off before they put the tank on.

Speaker 1:
That's right, their compressor has to be off along with the tank okay. They can't have this turned on and then pop that on there. It will either keep saying it's waiting and it just won't get into the fill cycle. So that's another good troubleshooting tip that some of the patients do.

Speaker 4:
If they turn the compressor on and they try to put the tank in and it's just going to say waiting.

Speaker 1:
It probably won't alarm or anything.

If you're going to have to troubleshoot just tell them to take everything off, turn everything down except for the continuous concentrator because they can use that while they're filling their tank. They can leave this to run all the time but this is what they're going to turn on and off, it definitely has to be off when they're filling a home fill system. The tank has to be off, it can't be on set on the tube.

Speaker 4:
Turn it off until it's connected and then you hit the power on.

Speaker 1:
Other reasons that they wouldn't fill is if their tubing is not securely put in or for some reason they have broke the tip off of this and they don't realize it because they've moved it around, there's going to be a leak so that's not going to fill. If I'm not mistaken there's no alarms for the home fill if there's leaks.

I don't think there are alarms at all, it's not an alarm it's just a light. That's why you're going to have to ask them. If there's an alarm going off it's the concentrator that's going off. If it's producing low O2 it should be either intermittently beeping to let us know that something's wrong and the yellow light should be flashing or the red light and the continuous alarm should be alerting them that something's wrong.

Sometimes patients will go I hear this beeping sound but I'm not quite sure what it is. Is it my smoke detector and usually it's this thing, this intermittent beeping because it's not producing good oxygen something wrong and it needs attention. Some patients will call up and say, "I think my concentrator is beeping." Have you had that happen intermittently when they've called up and said that so usually that's what it is. The concentrator needs to be switched out hand they can easily look to see what the alarm system is.

Any questions about the home fill system and how we're using it?