FREE SHIPPING On Most Orders Over $35! Use Code: FS35 | Exclusions Apply - Expires 1.26.21
Navigation
Categories
Recent Posts
Swipe to the right 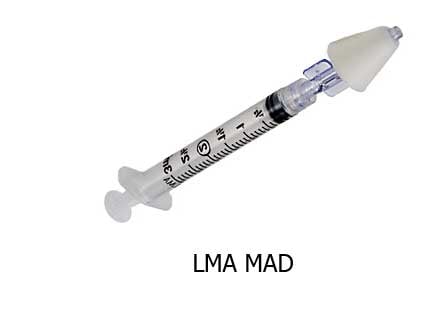 Intranasal medication is a procedure for administering medications through the nasal passages. Also known as transmucosal administration or nasal drug delivery, intranasal medicating employs an atomization device that fragments the medication into fine particles as it is being sprayed into the nose. This method of administration offers several advantages. This article will examine these advantages as well as what medications are commonly dispensed using this method.

The use of nasal administrated medications offers 6 key advantages. Nasal administration provides a direct route for medications, avoiding gastrointestinal destruction and hepatic first pass metabolism. Transmucosal medicating effectively increases bioavailability while decreasing time of onset. The process is easy to use and safe. We will explore these six advantages in more detail below.

Drugs administered orally are absorbed through the gastrointestinal tract. While enroute, the drug can be significantly degraded by gastric acidity, intestinal membrane enzymes, complexion with food constituents or bacterial enzymes. Oral medications sit in the stomach for 30 to 45 minutes before being sent to the intestines for absorption. After absorption into the blood, the medication is delivered to the liver for detoxification. This time consuming digestive process destroys much of the medication before it reaches the blood stream for dispersal throughout the body. While oral administration remains the most convenient delivery method, it provides very little absorption and transfer of the drug to the blood stream. 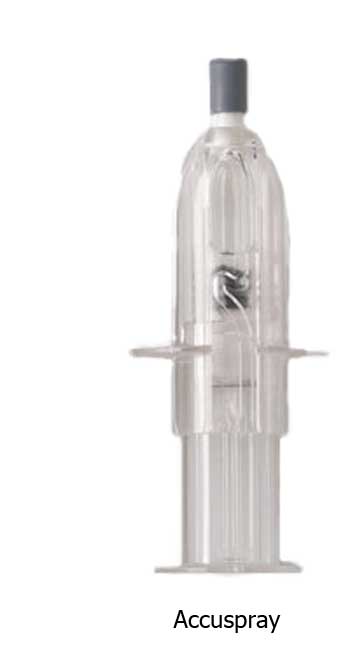 Nasal medication bypasses first pass metabolism while oral medications do not. As mentioned above, all blood from the intestines is routed to the liver for detoxification. The liver metabolizes around 90% of oral medications before the medication reaches the heart. This leaves very little of the drug remaining after liver detoxification for patient use. A nasal administered drug; however, absorbs directly into the veins through the nasal mucosa; therefore, by-passing first pass metabolism. The heart then pumps the drug to the entire body without delay.

Intranasal administration is rapidly effective with an onset time between only 2 to 10 minutes.

Nasal administrations may take the form of spray bottles, nose droppers, pressurized aerosol or atomized unit dose sprays. The latter is the most effective method. Spray bottles fail to provide a consistent dosage and often results in excessive amounts of the drug draining into the throat. Large particles of the medication can also form deposits on the nasal mucosa. Nose droppers often produce the same unwanted results as spray bottles with much of the medication not being absorbed and draining into the throat. Pressurized aerosol devices tend to break the medication into smaller particles that flow down to the lungs which offer less effectiveness with absorption and may result in respiratory complications. 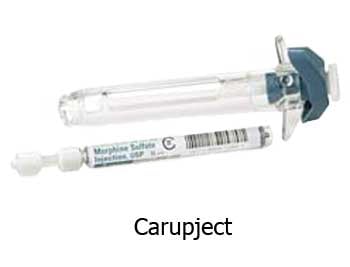 Atomization of the medication reduces the particles into 2 to 10 micrometers that provide for optimal absorption through the nasal mucosa. The mucosa offers a large surface area of more than 180 square centimeters of highly vascularized tissue. This area has more blood vessels per gram of tissue than in muscle tissue, the brain, or even the liver. Absorption through the nasal mucosa offers the best results for rapidity and efficacy. Atomization best reduces the medication particles to the optimal size for absorption. Additionally, because the medication is atomized into a mist form, it less is likely to be expelled from the nose into the external environment.

There are several manufacturers that make nasal medication devices. Below is a list of the bestselling devices listed alphabetically. 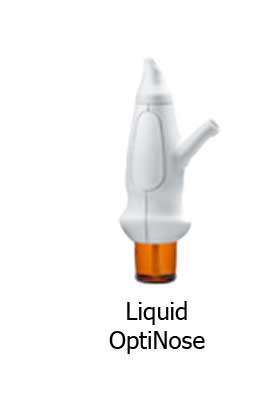 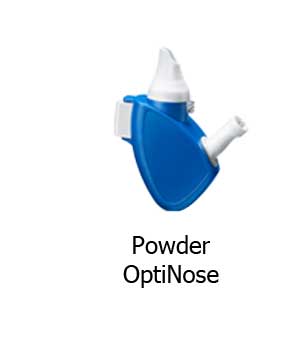 Nasal atomization delivery is being developed for many applications, including Alzheimer's, Parkinson's, brain tumors, diabetes, multiple sclerosis, schizophrenia, pain control, and migranies. Below is a list of the most popular drugs currently dispensed by intranasal administration grouped by treatment type. 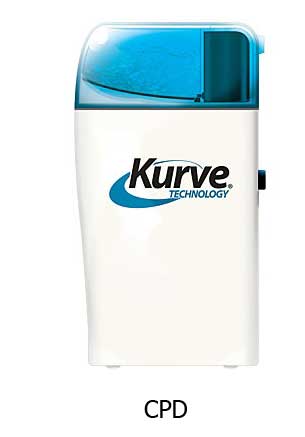 Fentanyl is an opiate used for pain control and is an ideal drugs for use with intranasal administration. A prescription is required for this drugs. Fentanyl has a rapid onset and short duration and is one of the strongest opiate drugs sold on the market. Intranasal fentanyl is rapidly absorbed, reaching maximum concentration in just 4 to 11 minutes. Bioavailability is around 71% but appears to be pH dependent with increased bioavailability associated with higher pH. 1

Ketamine is a dissociative anesthetic opiate that is often used for treatment-resistant depression. Beside IV administration, intranasal is the second most common method of dispensing Ketamine. Intranasal administration requires less skill to use and offers less risk to the patient. However, many patients report that infusion offers more relief and lasts longer while intranasal is less expensive and more convenient. 2

Midazolam produces sleepiness or drowsiness and helps relieve anxiety. It also produces amnesia so that the patient will forget any discomfort or pain that may occur following surgery. In intensive care hospital situations, Midazolam is used to induce unconsciousness. This drug is also used to treat epilepsy and seizures. Midazolam requires a prescription and close doctor supervision. Intranasal midazolam was found in a study to have the same efficacy as IV administrations but that the short administration time for nasal as opposed to IV set up favored the use of nasal delivery. 3

Narcan is an FDA-approved drug known as naloxone hydrochloride. This drug is an opioid antagonist used for the emergency treatment of individuals with respiratory or central nervous system failure due to opioid overdose. Administration of naloxone by nasal spray atomization is easy and convenient and offers increased efficacy. Narcan nasal spray is designed to provide a singe 4 mg dose. Administration of the drug using a Narcan MAD Syringe allows the medication to be atomized for quick metabolism. 4 The LMA MAD Nasal Intranasal Mucosal Atomization Device from Teleflex is specifically designed for administering this lifesaving drug. 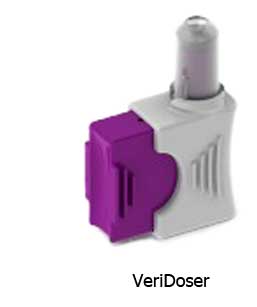 First Responders Use of Intranasal Naloxone

Emergency Medical Technicians (EMT) and ambulance crews have found the use of narcan nasal spray to restore spontaneous respiration for drug overdose patients in just a matter of seconds. Ease of use without the risk of needlestick injury are cited as primary benefits. The requirement for minimal training has also been cited as a benefit. Some have advocated extending the use of Narcan nasal sprays to community workers that often come into contact with drug abusers. 5Some police departments are now equipping officers with opioid-overdose antidote because the police are often the first on the scene.6 The U.S. Attorney General Eric Holder advocates that the police and fire departments should equip their first responders with naloxone to save drug overdose victims.7

Parental Use of Nasal Nacan

Some states are allowing Naloxone to be sold at drug stores without a prescription in an effort to curb teenage overdose deaths. 8